About 6 months ago, I started a new job. In the transition from old to new, I experienced one of those rare beasts: the glorious, accidental double pay. Over £400 of untaken annual leave pay hit my bank along with my new wage. My new wage was already better than the old and now I had £400 extra to do with what I pleased. Or rather, we pleased, as all married people will testify, such windfalls do not happen to a married person, they happen to you both.

And as luck would have it, or rather my lovely wife’s insistence, we booked for the height of the Christmas Markets, the most beery time of year in the city. Thankfully for us our visit was a week or so before the tragedy that occurred at a Berlin Christmas Market in December.

Once in Berlin we did all the usual tourist stuff. But, alongside the fascinating museums, architecture, and such like I did manage to squeeze in a few beer related activities. Not least of all was drinking a lot of Stiegl Pilsner at the Xmas markets. Admittedly, the Stiegl, as crisp and clean as it was, is actually an Austrian Pilsner, but let’s not quibble. We went to lots of impressive markets with big drinking halls but alas we were not in Bavaria so oompah bands and lederhosen were nowhere to be seen.

I got to try some Schöfferhofer Hefeweizen and Kristalweizen in the markets which were average for their style, and then the Gendarmenmarkt, the poshest of the markets with an actual entrance fee, had a gazebo selling a few beers that were a bit more special. My favourite of these was my very first Schwarzbier: A dark lager, that was just lovely. I must admit that my 14 month old boy was sleeping and I took full advantage to squeeze in as many as I could. Not to panic though, Mummy remains sober when Daddy behaves so irresponsibly. 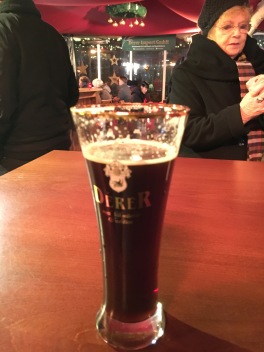 My first Schwarzbier at the Gendarmenmarkt – old ladies not included
The Stiegl remained the most readily available beer, though. In most places we visited, Pilsner dominated. Many many types of Pilsner. be it in the Pubs, Supermarkets, Restaurants or Kebab shops (Yes we drank in Kebab shops), Pilsner was king. And who can blame them, Pilsner is a beautiful beverage. The king of lagers.

I am sick of the denigration of lager among snobby ale drinkers. Yes, there are many mass produced, poor quality lagers, made with more corn sugar than malt, but lager and ales are just the two sides of beer, separated by yeast strains, storage duration and fermentation temperatures. They are equal in importance and validity. In fact, most ale styles could be classified as beginner styles for brewing and all lager is at least intermediate, and often difficult. Rather than the legitimate distinctions between ales and lagers, people focus in on arbitrary and often fabricated differences.

Stocked up on beer (mostly Pilsner)

I managed to get a few beers for the hotel room from a variety of Supermarkets, and even managed to sneak a few (lots) home in my luggage. Again, Pilsner was king and Hefeweiss took up a keen second place. From the first inception of the Meanwood Brewery we have had a desire to brew lagers as well as ales. And now we have the Frankenfermenter, the dream is close to a reality. We’re really excited about it and have agreed that Pilsner is the way to go. Or at least start from. Good job I tried so much of it. It is the classic lager that any lager drinker could drink and enjoy. Perhaps a little Yorkshire twist will find its way into our recipe.

One special place we found next to one of the markets was the Haus der 100 Biere. Here I tried the only doppelbock I found in Berlin. 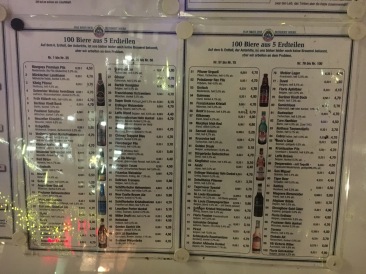 The House of a Hundred Beers
The final day of our  family holiday was a testament to the tolerance and love of my family. The entire evening was devoted to something I had been desperate to do. We stayed in the heart of old East Berlin and under a 15 minute walk North and South of our hotel were 2 Berlin Brewpubs with excellent reputations.

The Schalander Brauhaus to the north of our hotel was a beautiful restaurant style brewpub. Empty when we arrived, within the hour every table was full of diners. Sadly for all of them we had already grabbed the table next to the brewery equipment. Here I had a beautiful Munich Dunkel and a seasonal Christmas Bock. 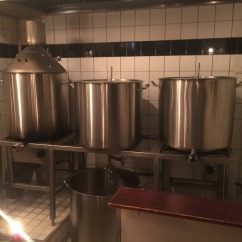 We also had a rather wonderful salad that took us 15 minutes to correctly identify ham and cheese as the primary ingredients.

On we went in a southerly direction till we reached Hops and Barley. This brauhaus had a totally different atmosphere. It was loud and busy had a lovely integrated brew system. 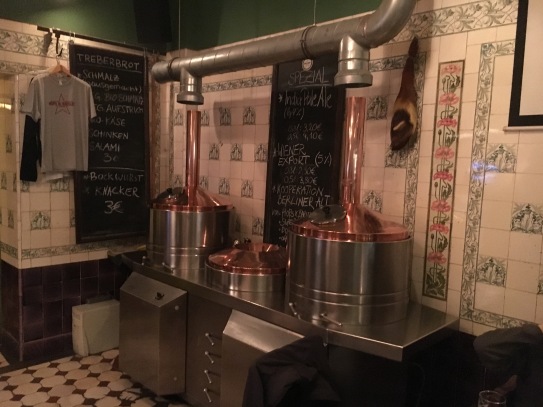 It was less restaurant and more pub. It was full of 20 somethings drinking and playing games. With a toddler in tow, we thought it best to sit outside. Luckily the -1 c temperature had risen to a temperate 4 degrees. Here I enjoyed two more firsts in my beer drinking, a Vienna Export and an Altbier.

The next morning we were off home but not before discovering that Pilsner is not the real king in Berlin. 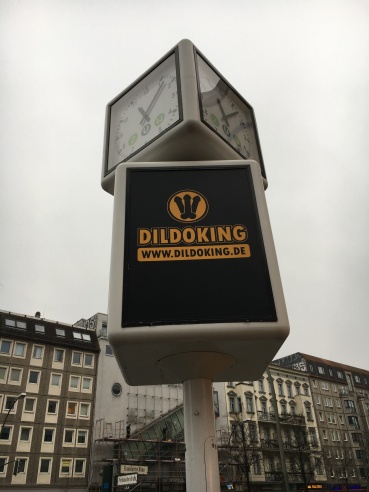